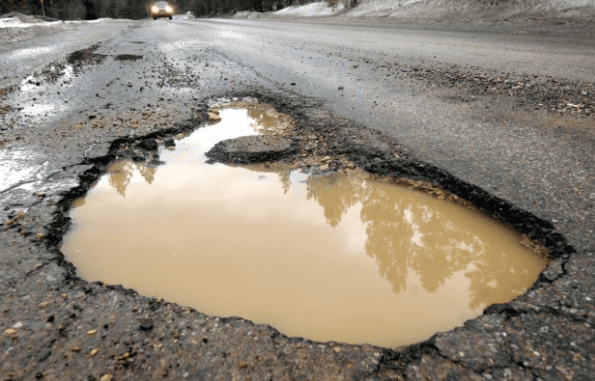 Well, turns out the term was originally used (as cited in 1826) to describe deep, cylindrical-shaped holes in glaciers and gravel beds. So, as a result, it made sense calling the holes that form in the road, which has a similar shape, a “pothole.”

February, March, and April are the months when potholes wreak havoc on your car. The consistent thawing and freezing – not to mention the water in the mix – is the perfect combination for creating these nasty street surprises.

If you live in an area that is currently thawing from the harsh winter, you’ll need to keep a vigilant eye when driving. So, as you hit the road here are tips to help reduce the impact and minimize the damage on your car.

How to avoid the potholes

Potholes can be avoided. The Michigan Department of Transportation advises you to do these three things to help avoid these little buggers.

However, if you do hit a pothole, here’s what to do…

“I hit a pothole”

Say you’re driving through town and BOOM you hit a pothole. Your suspension buckles and something under your car starts to rattle. Now you need to head into the mechanic to get your car fixed. “Thanks, pothole,” you say to yourself.

What could you have done next time to lessen the impact?

The Michigan Department of Transportation suggests you don’t hit the brakes as you hit the pothole. This helps your car and wheels absorb the impact better. The more you resist by pressing the breaks, the more your car will resist.

In conclusion, be safe on the roads this time of year, and always remember that being vigilant is the best way to avoid suddenly hitting a pothole and having to take your car to the mechanic.

“Peggy Marshall has been an absolute pleasure to work with in handling our insurance coverage needs!  There were a number of hoops that had to be jumped through for us to satisfy the bank.  I want to thank Peggy and your entire team for their professional excellence and client centered approach to their work; it is truly appreciated and refreshing!!”

We are buying a coastal property and we needed homeowners and flood insurance, everyone was superb in gathering the information we needed, they were terrific!

“Thank you very much for all your help with this…as usual, you made the process quick and easy. You’re the best!!!”

Save with Chase, Clarke, Stewart & Fontana's competitive homeowners insurance programs. Then save even more by combining both your home and personal automobile with our agency!